You need to be a subscriber to the In Running Trading Tool to run these rules which are simple to follow.

4a. Selections must have at least a 15% win strike rate

4b. They must also have a positive figure in black in the ShortInRun column, directly to the left of the Green% column.

The original idea was to set the offset bet at 15 ticks within a BSP range of between 6.0 and 30. I then looked at results and saw that a lot of the larger prices were dropping 15 ticks and more so chose to just use a minimum of 6.0.

Then there was a horse called Bally Lagan that went off at over 140 and during the race and the lay price never seemed to go below about 80 or 90, yet the official in play low was 25. The feeling is that whilst it must probably have been at 25 at one split second for a trade of £100 as per Betfair rules, this could have meant that just £4 was traded @ 25 to give the £100, so possibly:

A) If these larger BSP's do drop to a shorter price in running, is there likely to be enough for you and many others to get matched at what may often still be quite a high price?

B) Looking at all past results where a horse has a large BSP and has dropped 15 ticks/30 ticks etc, the in play low price is likely to be pretty unreliable and therefore a reasonable maximum price should be used.

There were initially 25 bets where the BSP was 21 or bigger and whilst 16 officially dropped by 15 ticks or more, going on what is written above, I would suggest that it would not have been possible to get matched on all or many of these, especially those at the higher end.

On the other hand, looking at the 68 horses who started at less than 21, 51 of them have dropped by 15 ticks or more and the average drop for these is far bigger at 73.

I would also be far more confident that there was plenty of money available to lay these horses in running at the shorter prices.

So max is 'Less than 21', minimum is 'Greater than 2.5' using an offset of 30. You must make your own decision on what settings you use.

When to place the back bet

Originally the bets were to be triggered on the Bet Angel software, 2 seconds after the race goes in play with the offset bet placed at 15 ticks below the matched price, however a couple of bets went wrong or were not placed and this has been changed now.

One example was a horse called Zaeem that had a BSP of about 30, (this is before the max BSP price rule was dropped to 30), and the bet was placed correctly 2 seconds after the race went in play but it only managed to get the bet matched at 16, so my 15 ticks drop would have had to drop another 18 ticks more than got matched correctly at 30. If a horse flies out of the gate, the odds will drop dramatically and quickly.

Therfore the back bets are now being placed 20 seconds before the start time. Whilst a lot of races go off much later and the prices can change, I think you have a better chance of getting closer to the BSP this way and will more likely get matched.

This does means that the lay bet needs to be 'kept' when the race goes in play, so for this you need to set a rule to keep all unmatched bets that is triggered 5 seconds before the off.

You can click the images below to see the settings using Bet Angel and whilst you can only have 2 nominated horses and sometimes there are three in one race, you will just have to select one to omit, probably the one that has the biggest current price or one that is unlikely to be within your minimum and maximum prices.

General rule for the back bet and is the same for the second nominated horse.

The parameters for the back bets including the offset rules for the lay bet at 15 ticks. 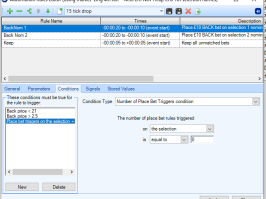 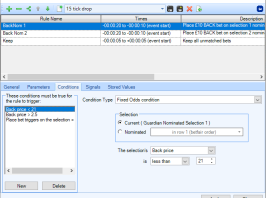 This is the conditions showing how to choose a minimum and maximum price for your bets as well as how to ensure only 1 bet gets placed on each horse. 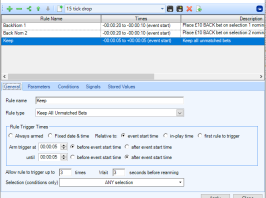 This shows the Keep all unmatched bets rule placed between 5 seconds before and 5 seconds after the start time to ensure the bets don't get cancelled at the off. You only need this General rule for this, no parameters or conditions.

Accessing all of the data

There is a lot more to the In Running  Trading Tool than just finding these bets.

If you want to purchase the In Running Trading Tool it costs just £79 for a full 12 month subscription.